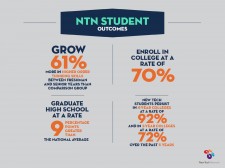 "Our mission at NTN is to become a nation proud of its public schools," said Lydia Dobyns, President and CEO of New Tech Network. "Our partnerships with public school districts and charter organizations drive everything we do, and together we are transforming teaching and learning around the country.  Our shared vision for student success ─ college and career readiness for all ─ means we aim to graduate every student aware, eligible and prepared to pursue post-secondary education or training."

According to Dobyns, college and career readiness for all students, and not just some, is an audacious goal. Compared to the national average, NTN schools eligible for schoolwide Title 1 had higher graduation and enrollment rates for the class of 2014. Nationally, in 2014, students from economically disadvantaged backgrounds had a 4-year graduation rate of 75% and the immediate college enrollment rate for students from low-income families was 58%. For the class of 2014, NTN schools eligible for schoolwide Title 1,  a United States Dept. of Education program that strives for all children to have a fair, equal, and significant opportunity to obtain a high-quality education, had an average 4-year graduation rate of 93% and immediate college enrollment rate of 59%.

"New Tech students acquire content knowledge and develop the skills necessary to conduct inquiry, apply knowledge and solve real-world problems. Above all, our goal in spreading New Tech practices district-wide is to ensure all students achieve their highest potential,” he continued.

NTN schools serve more than 72,000 students in 119 districts located in 28 states and Australia. For the 2015-16 school year, approximately one-third of the network was composed of elementary and middle schools and 20% of the districts have multiple New Tech schools. Six states are home to 10 or more New Tech schools, with Indiana and California having the largest concentration at 29 schools each.

The students in New Tech schools are as diverse as the states, communities, and schools in which they learn and grow.  On average, New Tech students are similar to students in the nation’s other schools, though they are more frequently part of low-income families.

For Evergreen, implementing the New Tech school model ─ that includes Project-Based Learning in conjunction with an emphasis on building student culture based on trust, respect, and responsibility ─ represented clear strategies for their students to develop social and academic self-confidence.

“Deeper learning outcomes are good for all kids. They promote agency, self-confidence, and lifelong learning with a sense of ‘I can figure this out’ whether it be a college pathway or a career access point,” said Gomez.

With a growing network, a proven school model, and a demand for more district-level support, NTN is acting as a catalyst for innovation and ongoing improvement. School districts are turning to NTN to support their efforts to spread innovative teaching and learning practices across multiple schools at all grade levels.

New Tech Network, a national non-profit organization, is a leading design partner for comprehensive school change. We work closely with districts and schools to create innovative learning environments. Through a proven school model, a project-based learning platform, and powerful professional development, we coach schools toward lasting change and ongoing improvement.

There are nearly 200 schools in 28 states and Australia in the New Tech Network. Visit a school today!

Get notified about new releases.

Sign up for email updates from New Tech Network.